GRAMMY Award-winning producer, Songwriters Hall of Fame inductee, recording artist, and TV star Jermaine Dupri has been writing and producing platinum records for more than 25 years. To mark a quarter century of success with his record label, So So Def, the GRAMMY Museum presented Jermaine Dupri & So So Def: 25 Years of Elevating Culture, an exhibit exploring the legacy of Dupri and the rise and influence of Atlanta’s hip-hop and R&B scene.

On the evening of the exhibit’s launch, the GRAMMY Museum hosted “A Conversation with Jermaine Dupri and Friends” in front of an intimate crowd of 200 people in the Museum’s Clive Davis Theater. Dupri invited music executive Jon Platt and iconic So So Def artists Anthony Hamilton, Da Brat, Jagged Edge, and members of Dem Franchize Boyz to be part of the conversation.

Welcome to Atlanta!  Founded in 1993, So So Def Recordings brought the innovative sound of southern hip-hop and R&B to a worldwide audience. Inspired by Berry Gordy’s Motown and Russell Simmons’ Def Jam, Jermaine Dupri created a powerhouse with his innate business sense, coupled with an ear for hits, an eye for talent, and the creative determination to spend the time necessary to create fresh beats and sounds. Artists such as Xscape, Bow Wow, Jagged Edge, and Da Brat brought a youthful edge that spoke directly to a young audience. So So Def became synonymous with hit songs, dominating sales and airplay charts. Even if they didn’t recognize the artist immediately, fans gravitated to So So Def releases because they knew the music would be great, a rare feat for any record label. 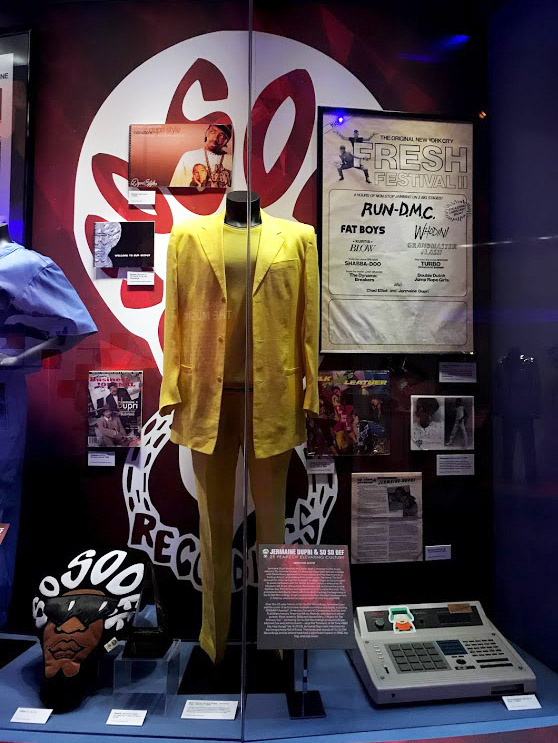 Jermaine Dupri Mauldin took an interest in music and the music business at a young age, having been introduced to the industry by his father, Michael Mauldin. By the time Dupri was 12 years old, he had danced onstage with Diana Ross, with rap trio Whodini, and at Fresh Fest, one of the first big hip-hop tours. At 15 years old, Dupri had produced his first album and released mix tapes under the name “So Def.” At 19 years old, Dupri discovered and developed the teenage hip-hop duo and sensation, Kris Kross, whose debut album reached No. 1 on the Billboard charts.

By 1993, executives at Columbia Records recognized Dupri’s unique ability to develop new talent and, as a result, he signed an agreement with Columbia Records that allowed the major label to distribute albums that Dupri and So So Def Recordings produced. This arrangement provided Dupri the freedom to focus on discovering and developing new talent while producing their songs. Dupri purposefully kept his label headquarters in Atlanta where he would focus on southern hip-hop and R&B. The first act he signed to the label was Xscape, an all-female R&B group, who achieved platinum-level success with their first two albums…and so, the story of So So Def Recordings had begun.

This dynamic duo earned their claim to fame with the bouncy sounds of their hit, “Jump.” The late Chris “Mac Daddy” Kelly and Chris “Daddy Mac” Smith were best friends when Jermaine Dupri discovered them at a mall in Atlanta. The duo didn’t intend to become rappers, but their look and inherent appeal convinced Dupri that he could develop them into stars. In an effort to make them stand out, he encouraged them to wear all of their clothing backwards, which proved to be a major hit among fans. In 1992, “Jump” would become the first rap song to remain No. 1 on the Billboard Hot 100 chart for eight consecutive weeks.

By the time they were 14 years old, Kris Kross was signed to Columbia Records and had a hit song. They opened for Michael Jackson’s Dangerous Tour, while their debut album soared past two million in sales. The duo released three albums before splitting up. Dupri’s work on behalf of Kris Kross set the tone for his career and demonstrated the powerful effect that a hip-hop group could have on the mainstream music industry.

LaTocha Scott, Tamika Scott, Tameka “Tiny” Cottle, and Kandi Burruss-Tucker together, created the R&B quartet Xscape. Sisters La Tocha and Tamika Scott both began singing in the church where their dad, Randolph Scott, was a reverend. LaTocha and Tamika first met Kandi and “Tiny” at Tri-City High School in Atlanta, where they decided to become a group and began rehearsing and performing locally. Their    performance at Jermaine Dupri’s birthday party in 1991 helped Xscape become the first group signed to Dupri’s new label, So So Def Recordings.

The group’s first studio album, Hummin’ Comin’ at ‘Cha, embraced a gospel-influenced sound and added grit to their sex appeal. Dupri served as executive producer and came up with the cover art concept for the album. Both their debut album (1993), and their sophomore album, Off the Hook (1995), earned platinum sales awards. By 1998, the group released its third and final album, Traces of My Lipstick. Shortly thereafter, the group disbanded to pursue personal aspirations. “Tiny” and Kandi would go on to pen the GRAMMY-winning hit “No Scrubs” for TLC, while LaTocha and Tamika pursued solo recording and acting careers.

Hit makers Brandon “Case Dinero” Casey, Brian “Brasco” Casey, Kyle Norman, and Richard Wingo comprised the quartet Jagged Edge. After meeting as teenagers, the group found early success when Kandi Burruss-Tucker of Xscape shared one of their recorded demos with Jermaine Dupri. Dupri was excited to work with the group and together they developed a sound that embraced the flare of hip-hop with the groove of R&B.

In 1997, they released their debut album, A Jagged Era, which received national recognition and earned a place on the Billboard 200 chart. Their second album, J.E. Heartbreak, went double platinum in 2000. The quartet’s third studio album, Jagged Little Thrill, kicked off with the R&B anthem, “Where The Party At,” which featured Nelly and earned the group a GRAMMY nomination. By 2007, the quartet parted ways with Dupri and released albums on other labels. Seven years later, they reunited with So So Def Recordings for their eighth album and once again collaborated with Dupri and Bryan-Michael Cox, who had previously penned major hits for the group. Today, Jagged Edge continues to remain a major force in changing the landscape of R&B. 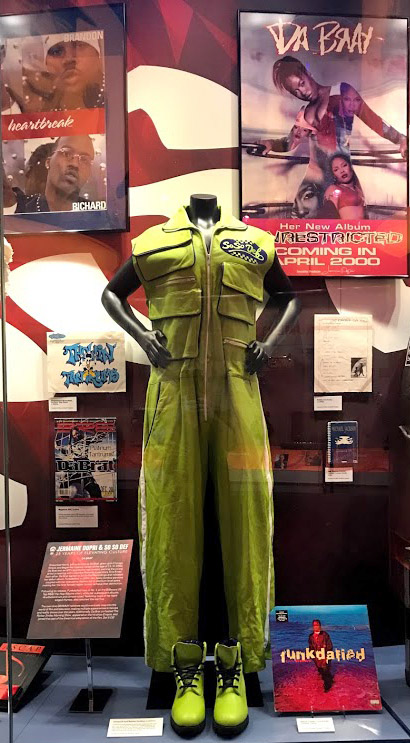 Shawntae Harris, known to the world as Da Brat, grew up in Chicago, Illinois and began her rapping career at the age of 11. In 1992, Da Brat was discovered after winning an MTV-sponsored rap contest. Her reward for winning the contest was a meeting with Columbia Records artists, Kris Kross. Soon after, Da Brat signed to So So Def Recordings and released her debut album, Funkdafied, in 1994. Her feisty tomboy persona, coupled with her innovative rhymes, lead to platinum-level sales, making her the first female rapper to achieve that distinction.

The two-time GRAMMY nominee would eventually step into the world of film and television, making multiple appearances in movies and reality shows over the years. Additionally, Da Brat co-hosted The Rickey Smiley Morning Show, appeared on the hit show Empire, and joined the cast of the theatrical adaptation of the film, Set It Off. 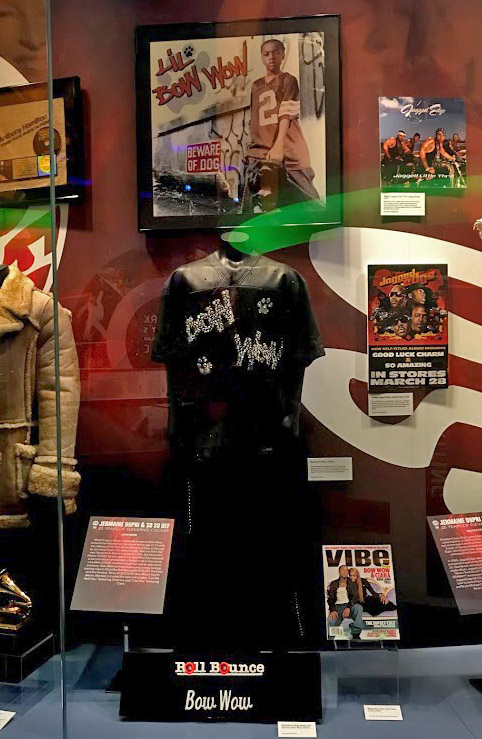 Columbus, Ohio native, Shad Gregory Moss started his career at the age of 13 with the double platinum album Beware of Dog. Commonly known as Bow Wow, he was another young talent fostered by Jermaine Dupri. Bow Wow’s subsequent albums went platinum and led to a successful acting career in films like Roll Bounce (2005) and The Fast and the Furious: Tokyo Drift (2006).

Bow Wow’s debut single was featured in Martin Lawrence’s film, Big Momma’s House, and, continuing his momentum, at the age of 15, he landed a feature role in the movie Like Mike (2002) on which Dupri served as executive producer. His third album, Wanted, reached platinum levels, with the singles, “Let Me Hold You” featuring Omarion, and “Like You” featuring Ciara, continuing a string of hits that Bow Wow would release in subsequent years.

Based in Atlanta, Dem Franchize Boyz were signed by Jermaine Dupri in 2005. Members Gerald “Buddie” Tiller, Bernard “Jizzal Man” Leverette, Maurice “Parlae” Gleaton, and Jamall “Pimpin” Willingham created “snap music” with multiple Top 10 tracks including “Lean Wit It, Rock Wit It” and “I Think They Like Me.” With the release of “I Think They Like Me,” the group proved to be unstoppable with their platinum-selling second album, On Top of Our Game, their first as artists on the So So Def Recordings rosters.

In 2003, Jermaine Dupri brought his So So Def Recordings to Arista Records, where Wayne Hardnett Jr., also known as Bone Crusher, was the first artist signed under this new deal. Bone Crusher’s debut album, AttenCHUN!, peaked No. 11 on the Billboard 200 chart. His hit single, “Never Scared,” became well known across a variety of entertainment platforms, including the gaming world, as it was featured in the popular video game, Madden NFL 2004. Bone Crusher introduced the sound of “crunk” to the masses and was instrumental in pushing the subgenre forward by opening the floodgates for rappers like T.I., DJ Drama, and David Banner.

Starting his singing career in church, Anthony Hamilton went on to pursue a life in music. Performing on stages throughout the country, Hamilton went through a handful of labels before finally joining So So Def Recordings, where he recorded the GRAMMY-nominated and platinum-selling album, Comin’ Where I’m From, in 2003.

Hamilton’s follow-up albums included Ain’t Nobody Worryin’ (2006), Southern Comfort (2007), The Point of It All (2008), and Back to Love (2011). In 2008, the 17-time GRAMMY nominee received a GRAMMY Award for Best Traditional R&B Performance for his rendition of Al Green’s song, “You’ve Got the Love I Need.” Hamilton also performed his hit song “Can’t Let Go” at the 2008 MusiCares Person Of The Year tribute honoring the late Aretha Franklin.

Over the 25-year history of So So Def Recordings, Jermaine Dupri and his roster of artists have received numerous accolades, including GRAMMY Awards, American Society of Composers, Authors and Publishers honors, American Music Awards, and platinum album awards. In 2017, Billboard placed Mary J. Blige’s hit “Be Without You”– written by So So Def Recordings producers Brian Michael Cox and Johnta Austin– atop the “Greatest of All Time R&B/Hip-Hop Songs” list. In 2018, Jermaine Dupri was inducted into the Songwriters Hall of Fame. Dupri continues to discover new, young talent, extending his So So Def legacy beyond the 25-year milestone celebrated in this exhibit. The songs and sounds of So So Def Recordings and its artists have had and continue to have a significant impact in shaping R&B, hip-hop and pop music.